(Courtenay; September 23, 2020) When the Canadian Museum of Nature announced the finalists for its 2020 Nature Inspiration Awards, there was only one name in the Lifetime Achievement category: Father Charles Brandt. A well-known environmentalist in the Comox Valley and Strathcona regional districts, Father Charles was nominated for the award by the Comox Valley Land Trust. 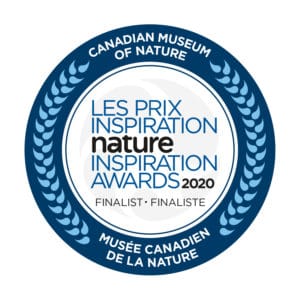 Father Charles has devoted his life to protecting and preserving natural habitats and has inspired generations of volunteers to work together to protect and preserve forests and rivers. As a spiritual leader and conservationist, Father Charles helped establish the Tsolum River Task Force, which ultimately became the Tsolum River Restoration Society. At age 97, he continues to act as one of the society’s directors.

Father Charles was also instrumental in creating the Oyster River Enhancement Society, contributing to the return of salmon and trout stocks on that also once-decimated river. He served as an ORES director and remained active in the society until 2014 when he was appointed a director emeritus. Beginning in the early 1990s, he was also part of the Oyster River Watershed Management Committee, a roundtable of government, industry and citizen representatives advocating for improved forest management activities. Father Charles remained active with the ORMC until it disbanded in 2012.

Reacting to news of the Canadian Nature Museum’s award, Father Charles wrote, “With [cultural historian] Thomas Berry I can only say that the human community and the natural world must go into the future as a single sacred community. This is a step in that direction. Thank you.”

“We are pleased to see Father Charles recognized on the national stage for his work here on Vancouver Island,” said Comox Valley Land Trust Executive Director Tim Ennis. “His decision to leave his property to the CVRD as parkland, with a conservation covenant held by the land trust that will protect it forever, sets a strong example for others.”

Father Charles will receive his award when the winners in the other six categories are announced on November 25. Winners in each category receive $5,000 they can designate to a nature-related program of their choice.